SURVIVE THE FUTURE – A COLLECTIVE DECISION MAKING GAME presented by Centre for Innovation
Where do our choices take us? Do you fight for your own individual survival or do you contribute to something bigger than yourself? Exploring how the future of war, trust, transhumanism and immortality might influence our future.

The robots are coming! They’re getting smarter, cheaper and more reliable. How long will I have my job before a robot steals it? HUBOT explores the future of work. They strive to inspire everybody, from all different levels of education, from young to old, including those who are currently excluded from the labor market. 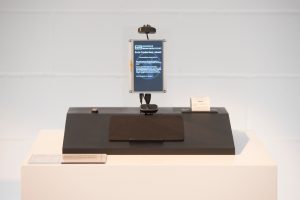 This new installation will be presented to the public for the first time. It is part of the Data Production Labour series. This series invites participants to reveal the hidden dynamics behind the devices used in their daily lives: what before were users, are now unrecognised data workers of Big Tech.

On 10 April 2018, Mark Zuckerberg was interrogated by US Congress. Fake News presents this hearing on three screens that each use different Instagram Face Filters. The work creates a new absurdist perspective on conversations about fake news, Facebook users’ privacy and future Facebook regulations. 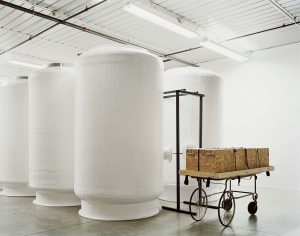 In 1962, Robert Ettinger published ‘The Prospect of Immortality’, the book that gave birth to the idea of ‘cryonics’ – the process of freezing a human body after death in the hope that scientific advances might one day restore life. Artist Murray Ballard undertook an extensive investigation of the practice Ettinger inspired. The project combines photographs of the technical processes involved, alongside portraits of the people engaged in the quest to overcome the ‘problem of death’ 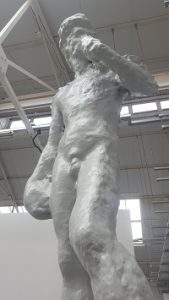 Blockhead is a sculpture and the result of a process described by artist Rudolf Romero as Social Cubism. In this collaborative work, Shaun Fraser and Rudolf Romero collected over a hundred photo’s of Michelangelo’s David, taken by visitors of the Victoria and Albert Museum. These captures were digitally stitched together and rendered in order to produce a new version of the David which they 3D printed in a size similar to the original.