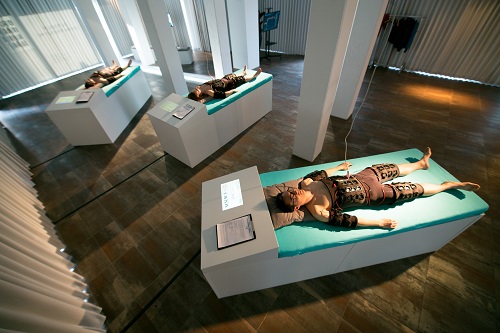 About the IoHO
The IoHO explores the relationship between humans and technology in a society that exponentially automates labour. In its installations, the IoHO proposes different systems of relations that question the socio-political and economic implications of humans’ relationship to technology.

The new role that humans have taken in society is obscured by promises imposed by Big Tech. Behind narratives like ‘free services’ or ‘users’, surveillance capitalism has implemented a new belief system. New methods of capital extraction, secret military exploitation and unrecognised labour operate under the seemingly innocuous daily use of technology.

Data Production Labour
In the series Data Production Labour, the IoHO invites participants to reveal the hidden dynamics behind the devices used in their daily lives: what before were users, are now unrecognised data workers of Big Tech. Through this framing, the installations problematise aspects of the exploitation of humans’ data labour, and its misuse for military, economic and political purposes.

On Thursday 8th of November, founder of the IoHO Manuel Beltrán will also present a lecture as part of the conference program of Brave New World.

For more information about Manuel and his work, please visit the IoHO website.